Acrylic and oil on canvas

Love Birds (in the pink)

Geary is pleased to present a two-person satellite exhibition at Johannes Vogt on the Upper East Side for the month of April.  Belonging features the work of Brooklyn-based artists Yael Ben-Simon and Jessica Perelman.

Israeli artist Ben-Simon will present a collection of oil and acrylic paintings that explore the perceptions of identity, nationalism, and borders in a colonized world as they manifest through flags and regalia. Ben-Simon’s new series of work results from her research into the 17th century book of emblems, Iconology, by Cesare Ripa.  Emblem books were popular and contained depictions of human figures as abstract ideas in texts and images. Offering a lexicon of archetypical characters, it is a road map for deciphering the art and culture of the late Renaissance and Baroque eras.  Ben-Simon’s fascination with this lexicon is a continuation of her previous body of work in which she works with flags, often with depictions of animals whose vigor and valor are translated into authoritative badges that augment the high social status of their bearers.

Jessica Perelman offers a series of tabletop ceramic sculptures on a single table in the center of the room that examine nostalgia and kitsch as it emerges through common objects found in the home such as decorative plates and baskets of flowers. She references the maximalist tropes of femininity and language of craft arcing from The Met to The Salvation Army: lace, flowers, embroidery, pinks, quilting, weaving, floral arranging, and the female body. Her work is unapologetically handmade, yet recalls the mass-produced household object.

Together, these two artists consider home and origin point, and how it is perceived through material, object, and image.

Jessica Perelman was born in Chico, California, and works primarily in clay and painting. She graduated with Honors from Pratt Institute with a BFA in Drawing (2014) and has mostly worked in clay since then. Recent exhibitions include group shows at Russell Janis (Brooklyn), Cooler Gallery (Brooklyn), Calico Gallery (Brooklyn), and Thomas Hunter Project Space (NYC), and residencies at the Vermont Studio Center (VT) and Wellfleet Firings (MA). 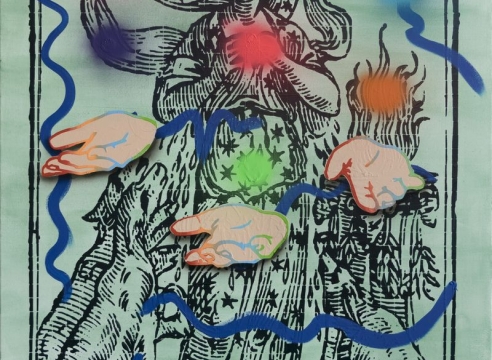