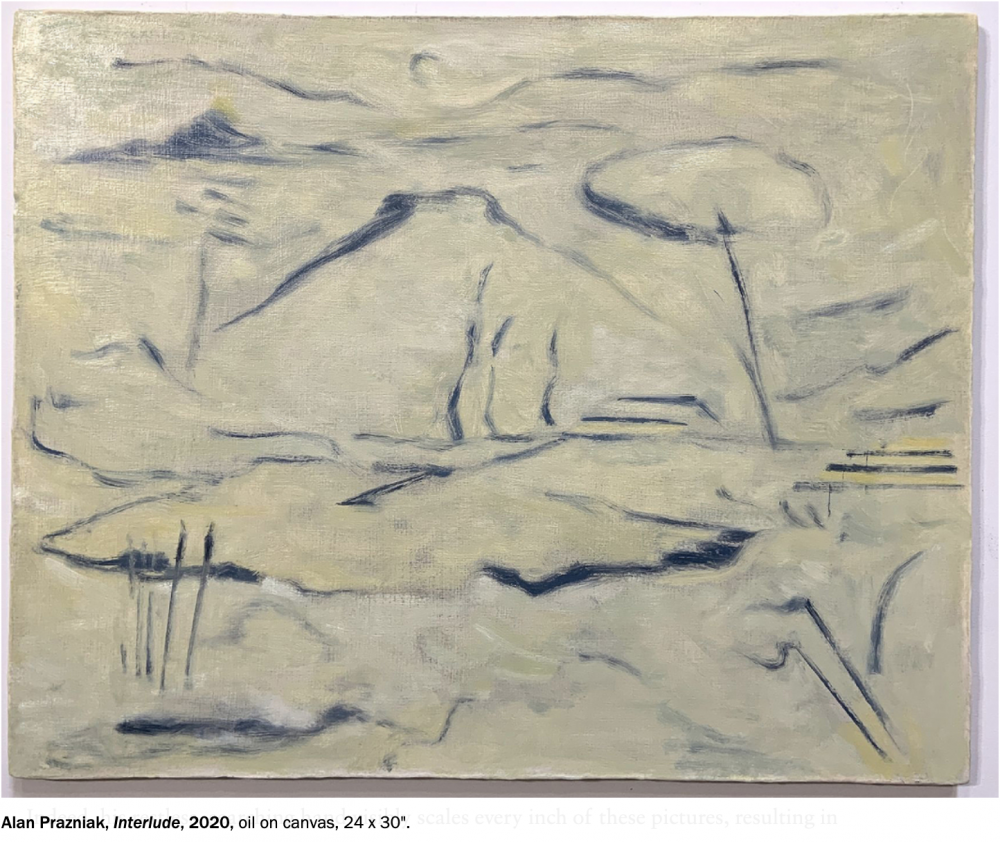 “Modern Country,” Alan Prazniak’s second solo exhibition here—reconfigured, of course, for virtual presentation—is an exploration of landscape painting that merges the classical with the hallucinatory. The show is accompanied by a video of the artist’s studio that features him flipping through assorted sketches, with details of the seventeen oils on view. We get a sense of the canvases’ relatively modest scale through a shot of several hanging together, salon style. In a voice-over, Prazniak posits that a painter’s mission is “to get lost.” Indeed, his restless, searching hand visibly scales every inch of these pictures, resulting in works that engage and extend observation, making you crave the intimacy of examining them in real life.

Interlude (all works 2020) is a wispy wet-into-wet image featuring a distant sun, rolling hills, a pond, and blades of grass. Although formally and chromatically ascetic, it is nonetheless activated by the artist’s vivid paint application, which, at various moments, can be buttery, viscous, wan, and even luscious. The picture plane of The House of the Orchard is kinetic yet contained, built from wonky geometric forms. A bird, a wolflike creature, and a single floating flower are rendered as flat decorative motifs that flank a nighttime scene at the heart of the piece, which suggests a portal into an untamed elsewhere. Gradual Stone is agitated, ominous: It depicts a billowing and heavily impastoed smoke cloud rising from a small site on a scumbled horizon. The sky is tinted orange and roiling with churning brushwork. Landscape is Prazniak’s subject matter, but so is oil paint, which he employs with great skill, emphasizing its physicality and versatility. Although the artist’s wandering takes place on the surface of the canvas, he pulls us deep into the construction of each tableau and its seductive, inscrutable pleasures.